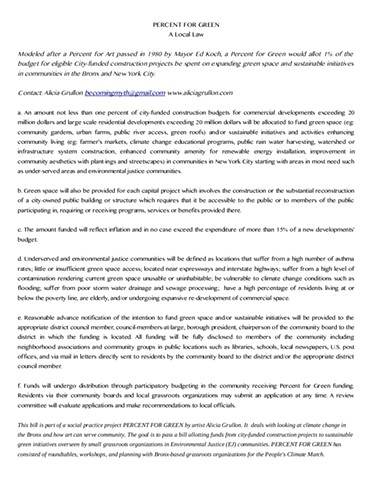 PERCENT FOR GREEN
< previous next >

PERCENT FOR GREEN's goal is to pass green legislation which would allot 1% of the budget for eligible City-funded construction projects be spent on expanding green space and sustainable initiatives in under-served communities in the Bronx. PERCENT FOR GREEN is a part of InClimate a seven-project exhibition presented under the auspices of Franklin Furnace Archives and its founder-director Martha Wilson. Curated by Regina Cornwell, InClimate's initiative calls upon artists to find solutions and antidotes to society’s most cataclysmic problem. PERCENT FOR GREEN is modeled after New York City's 1982 Percent for Art bill which calls for 1% of city-funded construction projects be spent on public art.

This bill was formed through discussions with Bronx residents. It is part of the Bronx Climate Justice Agenda, a collection of legislation and demands by Bronx communities and grass roots organizations to address environmental injustice issues in NYC, the USA, and world.