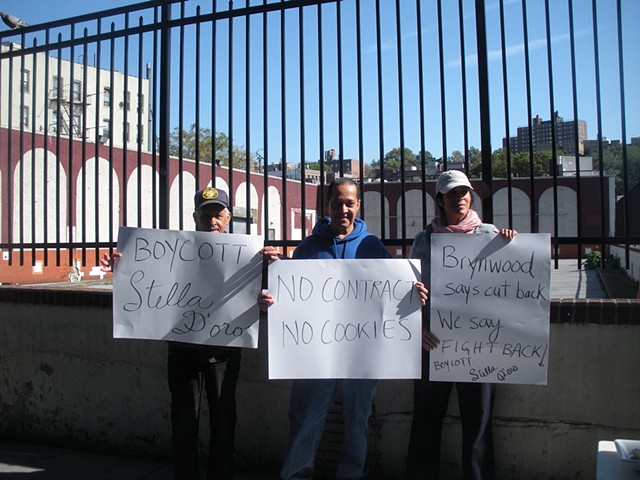 For 10 months, workers from Stella D’oro cookie factory struck to protect their wages, health insurance, and sick leave. Brynwood Partners were trying to make cuts that would compromise the workers’ way of life. A family owned business, Stella D’oro started in 1930 in the Bronx employing neighborhood residents for decades. The average salary reported from former employees was $18.75 with benefits and pension. After being sold to Nabisco/Kraft in the early 90’s, the factory was resold to Brynwood Partners. In the summer of 2009, a NY judge decided in favor of the workers- Brynwood had to pay up. Instead Byrnwood said it could not afford to recompense the workers. So they moved the factory south. Today the gorgeous smell of baking cookies that filled the area is gone and a mini mall with businesses offering minimum wages will open 2014.

For the piece, I recreated the signs used by workers and stood at the exact site as the original strikers had one year before. I baked cookies and offered them to passersby. Many former employees remain unemployed in the area. Some passersby thought that my performance was still part of the real strike. Others did not know what had happened.