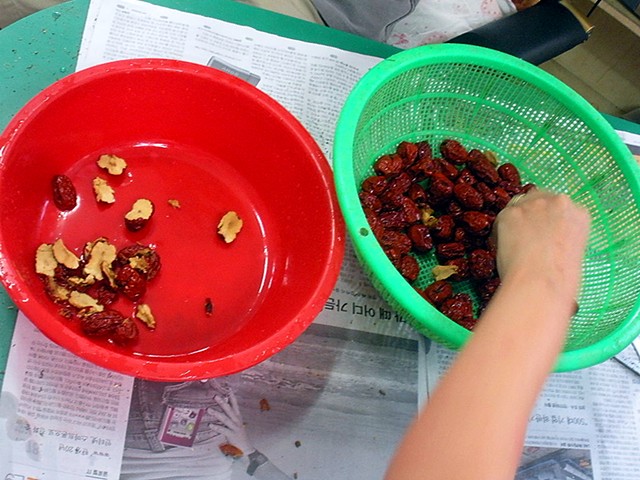 This intervention was unexpected. I received a phone call to come to a traditional medicine shop. I had approached the owner a few weeks before, to request if it was possible to learn how to make one of his medicinal products. He said he would call when he had some orders. The only reason he accepted my request was because I was a foreigner. He would never show a Korean because these businesses are very competitive and formulas for medicines are readily stolen. The process was very specific and free of any allure. Modern technology has replaced old ceramic pots and days of boiling thirty-six different varieties of bark, seeds, grain, flowers, and fruit. It took several hours to make each infusion with industrial sized pressure cookers. Younger generations are rapidly losing interest in these medicines. They prefer modern methods to treat aliments and general health, seeing traditional infusions more as placebos rather than actual cures.

There was a Korean artist with me, Sungsoo Kim and as he photographed and watched the process, he began to recall childhood memories of his grandparents making similar infusions at home. The sweet smell emitting from the pressure cookers was comforting. An older woman waiting for a brew to finish told us that these medicines used to be available only to the wealthy forty years ago. She had only started drinking it a few years ago. Her children paid for her monthly supply. The shop owner had retired recently starting this business as a way to keep him busy. He was much happier now, had lost weight and felt stronger. People even said that he looked younger. As each person shared their story, the secrets of the medicines were revealed and restored.