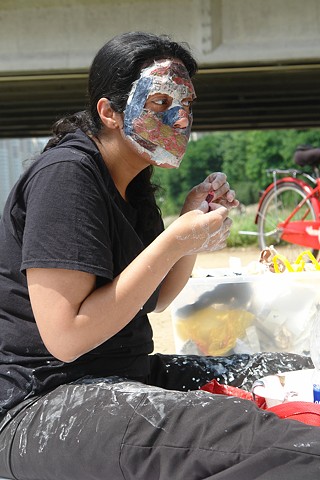 I created a mask from pieces of traditional hand made paper by the river bank. The Anyang River flows through the city of Anyang and then steadily into Seoul. It is not very large, and may look like a creek to anyone used to the widths of the Han River in Seoul or the Hudson River in New York. One of its bridges, the Manan Bridge, was constructed as part of the Silk Road. People cycled and walked by as I sealed my face. Not many stopped. They glanced over with inquisitive looks on their faces trying to figure out exactly why I was doing that. One man stopped for awhile, an amateur photographer for whom I proved to be a favorable subject. As the day went on, I realized that these interventions have never been about me. Those around me created the experiences for all of us. It was never so much that I was making the mask or why, that was only the catalyst. Those who gathered created an intimate space interacting and exchanging words, information, or nothing. I was with them and I was not.