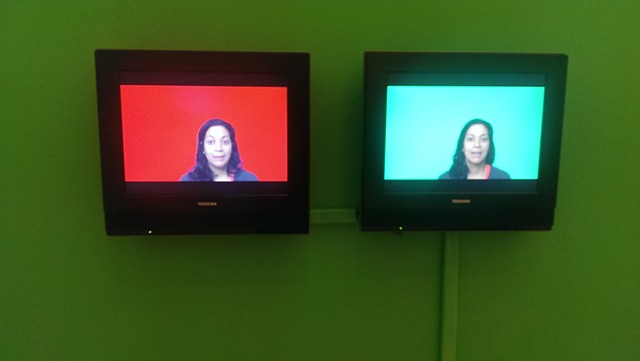 A result of my residency at EL Museo del Barrio, part of "Back in Five Minutes" a project of Nicolas Dumit Estevez. My residency culminated in an installation titled "Alicia in 3 Parts". It consisted of photography and video on ideas regarding identity, race, and current events.

Calling out radicalized nomenclature used in the West, in this video installation I use slang terms to describe my racial appearance in Spanish and English (prieta, india, black, white, etc.). The format was inspired by a popular game played during Plato's time Ostrakinda, it involved two players and one shell. The shell was painted black on one side (for night) and white on the other (for day). Each player would take turns flipping the shell and calling a side. I address myself with a terms in a continuous loop of back and forth, waiting for a win and an identity.